The Silly King (in Swedish “Dumma Kungen”), a libretto and original story written by Monica Vikström-Jokela. English translation by Cecilia Damström. All photos by Laura Reunanen, used with her permission.

Once upon a time there was a King who lived in My Land and he was a very silly King. The only person who was as silly as him, was the Queen. They used to have The Wise Lady (Kloka Gumman) to help make good decisions, but she moved to Flatland and now everything is upside down in My Land. The people in My Land don’t know what to do as the King keeps making up new laws, one sillier than the other. 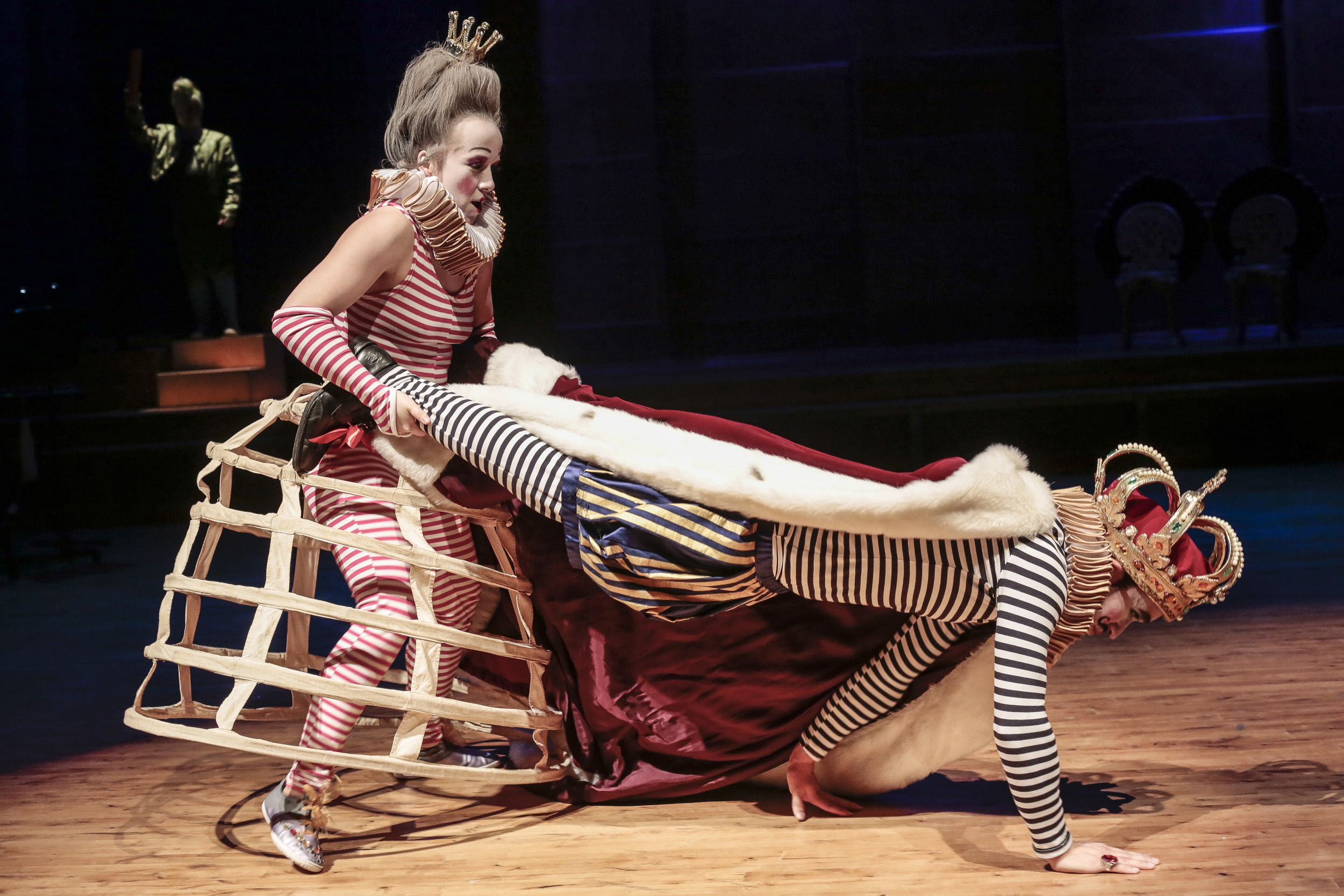 The biggest event in My Land is the My Land feast where they have a Buddy Pack Competition. It is a competition where one person carries his friend on their back, and he tries to be as fast as possible. The King and Queen are preparing for participating in the Buddy Pack competition. In the middle of their training session someone knocks on the door and a child called Tinder comes in with a letter from The Wise Lady. The Wise Lady writes that Tinder will stay at their place for a while. She also writes and tells about how nice bicycle lanes they have in Flatland, as no one can afford a car there and that the Queen of Flatland is a very good queen. 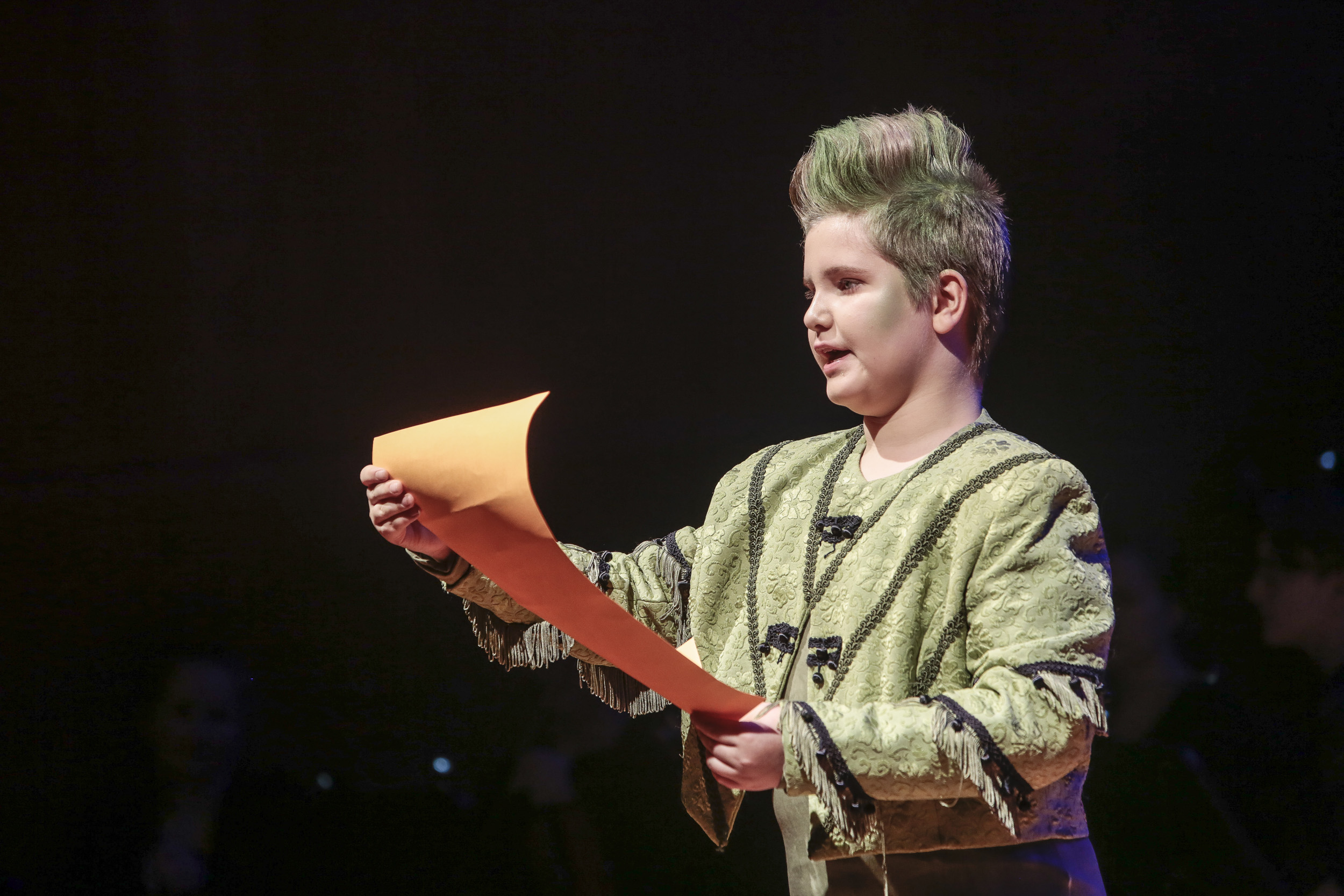 The King gets jealous of the Queen in Flatland and her bicycle roads and comes up with the idea to build an own motorway up and down the mountain. Everyone is terrified by the idea and tries to remind him of that the nature will be ruined, but he doesn’t care. He gets annoyed that no one agrees with him and asks what Tinder thinks of his drawing of the motorway, and Tinder says “I think it’s very nice, just what a railway should look like”. Everyone agrees on this new idea and finally the King is very pleased with himself for having come up with the idea of building a railway. 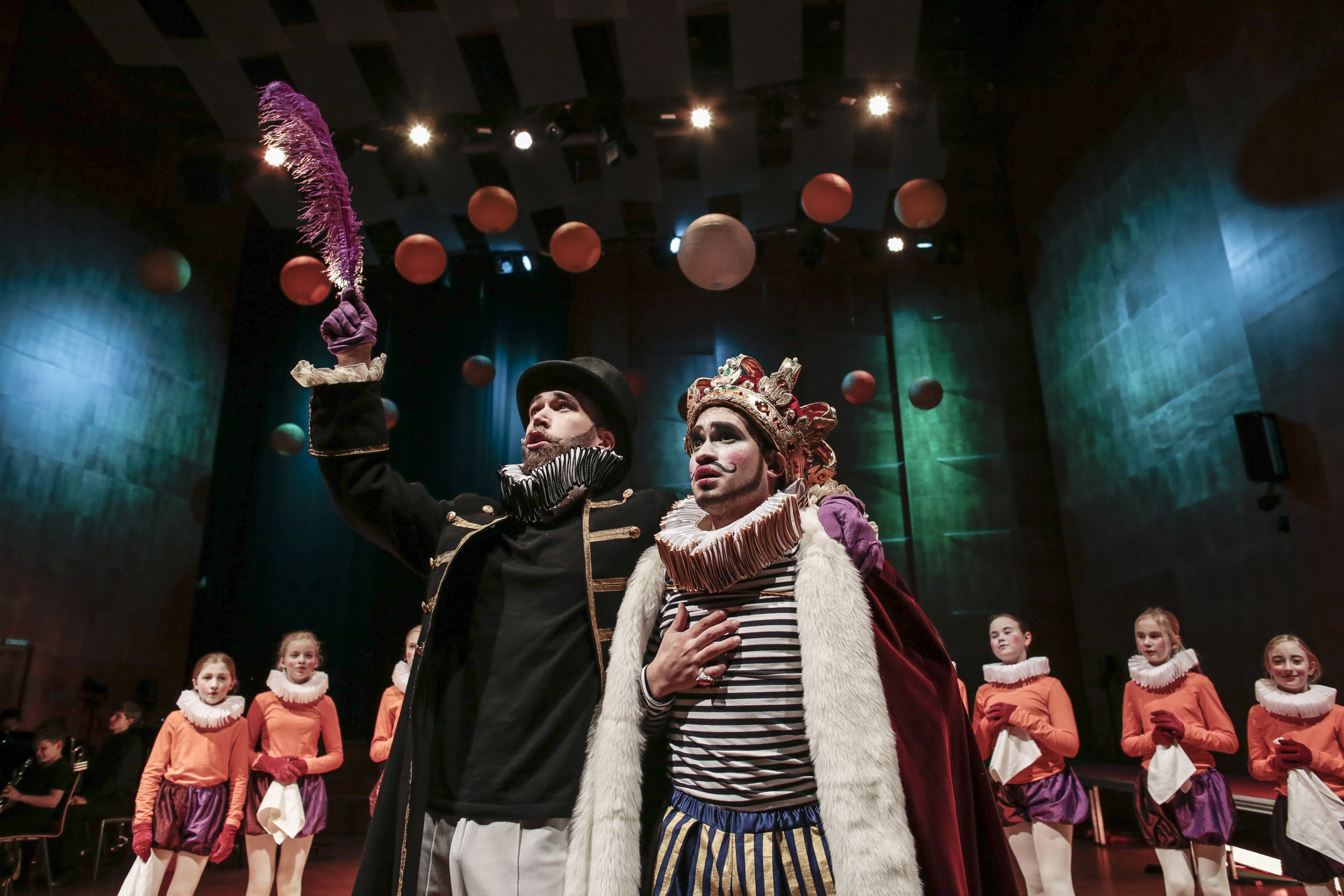 With the help of the audience a railway is built (verbally) and they keep an opening ceremony where they sing the song “The King is the best”. But when the first train arrives at the newly built platform, it is full of people from Flatland! The King is very annoyed, as this wasn’t what he planned, that foreigners would take the train to My Land. He says to Tinder to tell them in Flatlandish that they have to go home, but conveniently Tinder translates the Kings words to them so that they are very welcome to My Land, which makes the Flatlanders delighted.

The people in My Land are very happy to have the Flatlanders as new inhabitants, because they are very good at many crafts, such as for instance making chocolate. The King and Queen however are very annoyed about the fact that the Flatlanders sing in a language they can’t understand, because now they can’t spy on them. So the King makes up a law that you only are allowed to speak and sing in My Land’s language. He tells Tinder to translate that it would be a good idea for the Flatlanders to move away from My Land as soon as possible. Tinder tells them they are warmly welcome to the My Land Feast, which again annoys the King, but he can’t do anything about it. 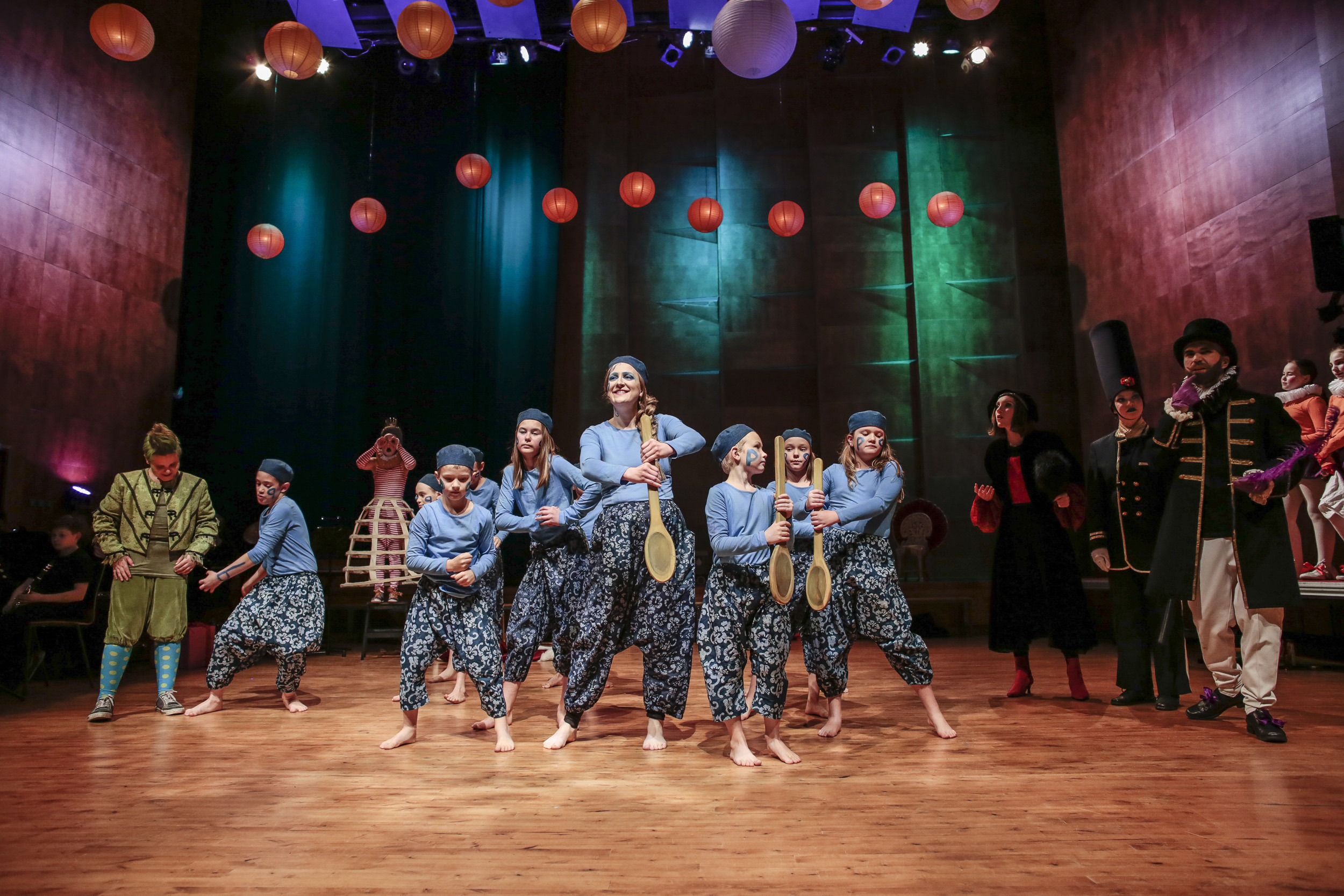 At the My Lands Feast Tinder is very bored and the Queen is very annoyed that the Flatlanders didn’t bring any presents, as you are supposed to do. The King gives his speech and opens up the Buddy Pack competition. However the Queen, who is supposed to carry the King in the competition, falls and sprains her ankle and can’t walk anymore. Now for the first time in history the King doesn’t anymore have a couple to participate with in the competition. He tries to ask many My Lander’s who wants to be his pair, but everyone turns away from the King, because no one wants to carry him. After a long awkward silence Ben, one of the Flatlanders, steps forward and Tinder translates that Ben wants to be the pair of the King. The Queen gets annoyed and says it’s a stupid idea, as you have to be a buddy, a friend, in Buddy Pack. The King thinks for a while and then stretches out his hand, introduces himself and asks if Ben wants to be his friend and Ben says yes. Now the competition can begin and the people from My Land give a big hooray. The King asks why the Flatlanders didn’t say hooray, and Tinder reminds him that they are not allowed to sing on Flatlandish. The King quickly makes a new law that you are allowed to sing in whatever language you want to, and now the Flatlanders can join the happy choirs of hooray. 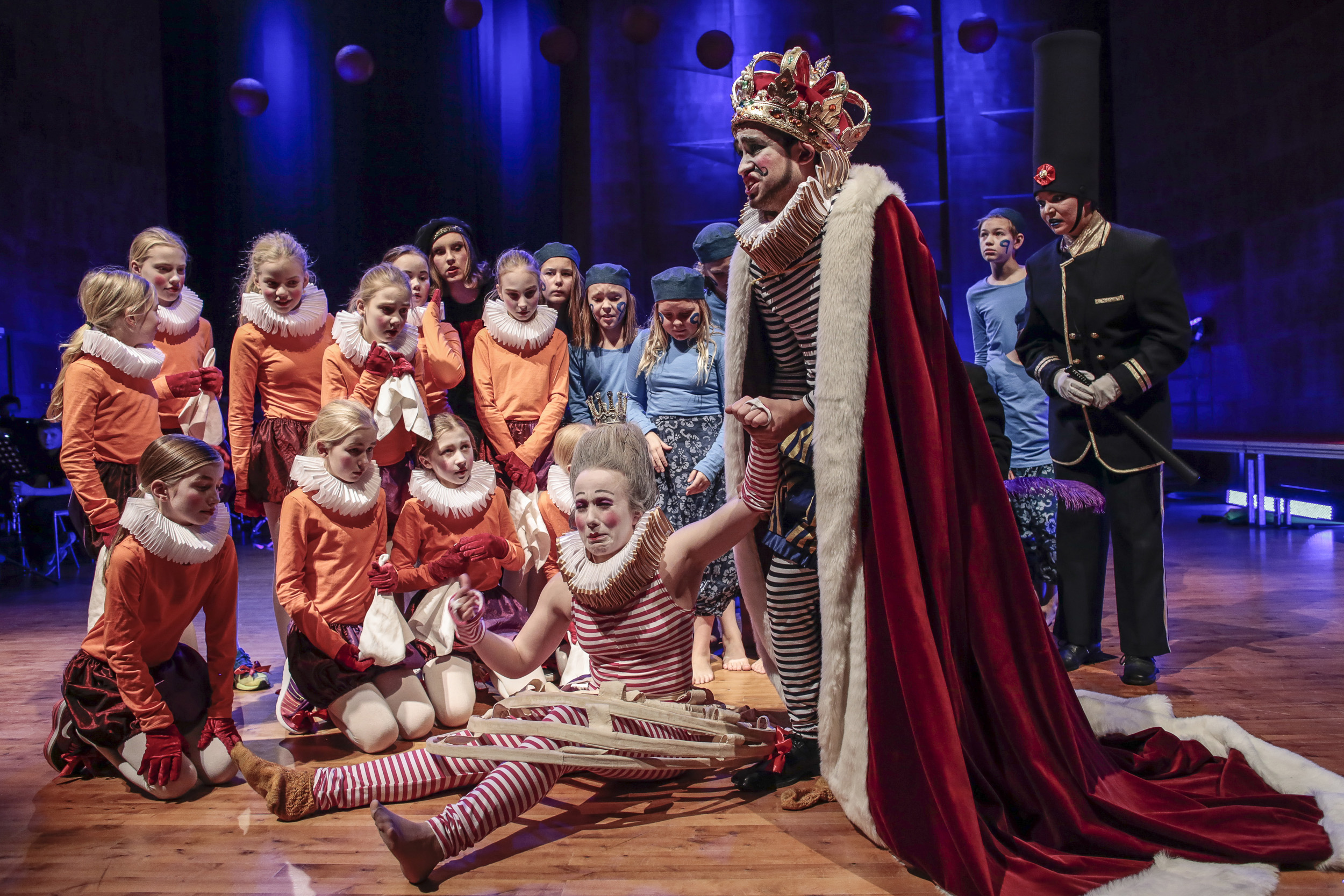 The Buddy Pack competition takes place and there are three very even teams competing, The Polices, The Gnomes and BFBK which stands for Best Friends Ben and the King. The competition is very exciting and in the end Ben and the King win the competition. Now even the happy King joins in with everyone else to sing the happy song of the Flatlanders in Flatlendish. 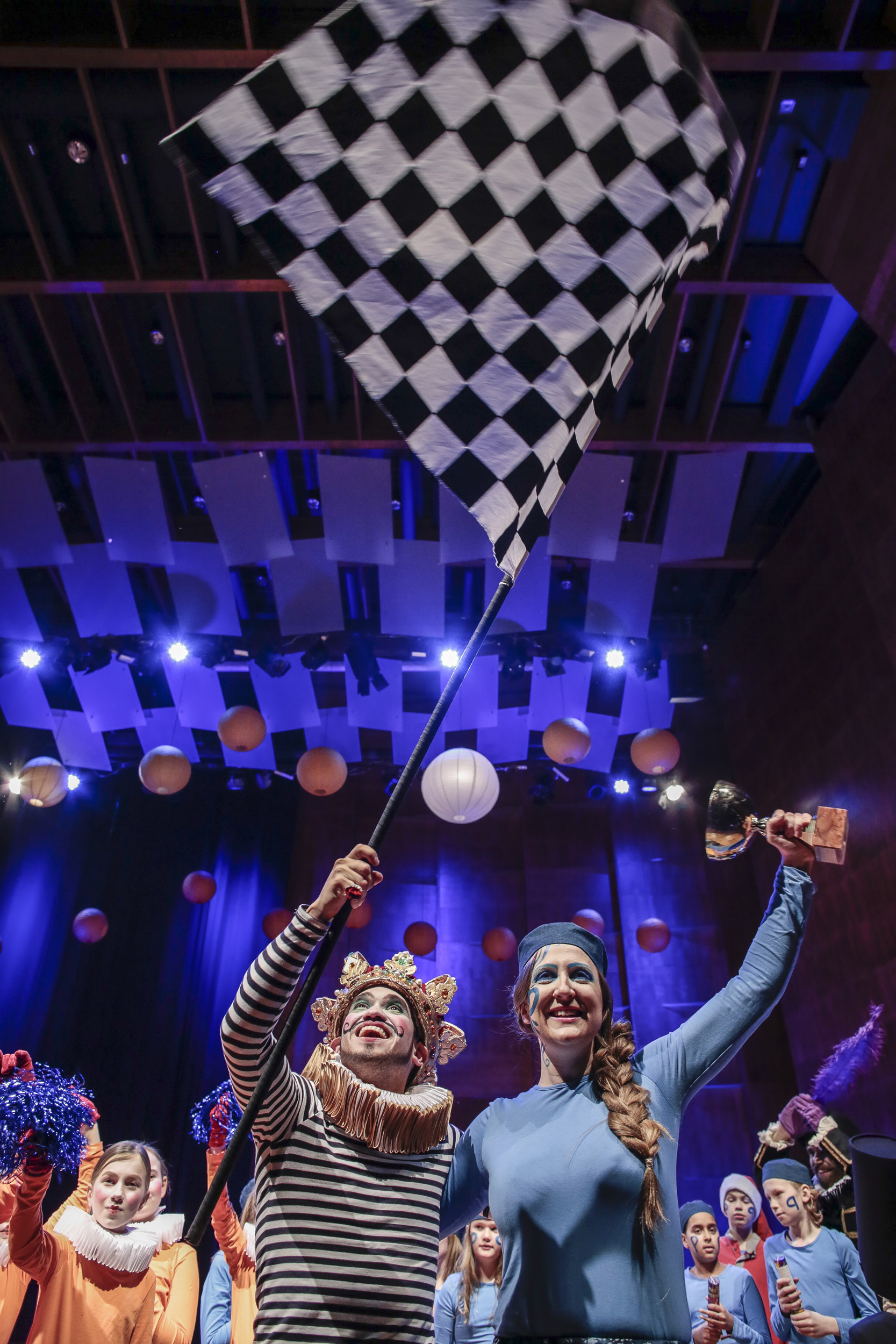 It is time for Tinder to leave My Land and he has a letter from The Wise Lady for the King. She writes that she thinks Tinder has finished their mission, and the King gets confused and wonders what mission Tinder was on, and Tinder also wonders. The Wise Lady also writes that the King and Queen are welcome to visit the Queen of Flatland. The King is terrified by the idea of travelling abroad to a country where he would be a foreigner and no one would understand him, nor know that he is the King. His Minister and Tinder say it might be a very good idea to travel and finally the King and Queen decide to travel. The King says to Ben that he can replace him for the while he is away and if he wants he can also make a few new fun laws, Ben has become a true friend.

All that is unfamiliar, might feel wrong and scary
until you say hello,
because when you stretch out a hand
you notice that in every land
is someone just like you.

No one is identical, but we all have things in common,
you can feel secure,
because if you once get lost on the way
remember that you have a friend in me,
I’ll carry you all the way. 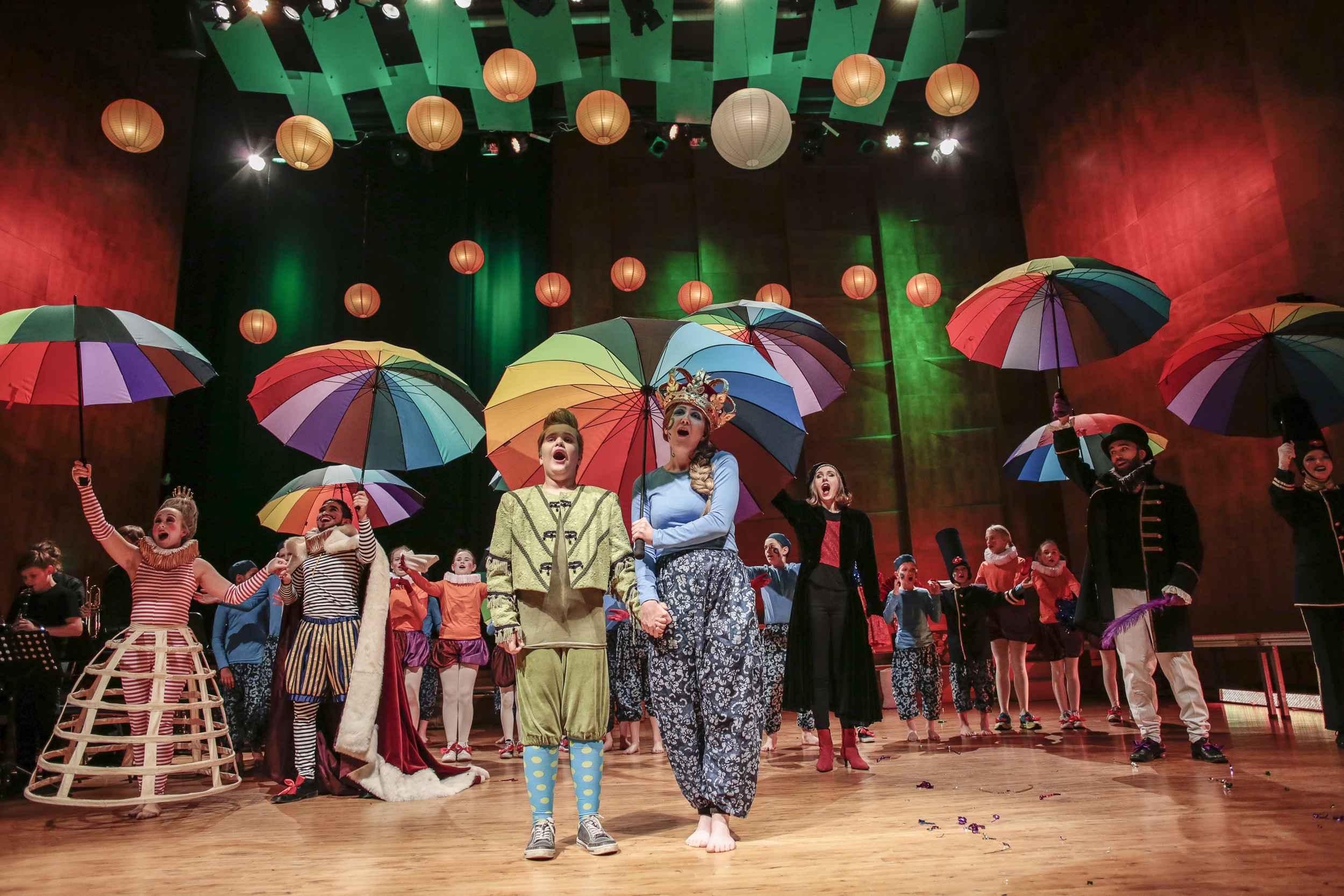 “Everything in this opera works! The story about a king who wants to decide over everyone is well written, perfect for a children’s opera. Cecilia Damström’s challenging and interesting compositions add a new dimension to the production. Also the scenography is simply stunning.”

“It is a musical challenge to compose music that considering the pedagogical aspect is singable and playable for a very young student orchestra. But this is exactly what Cecilia Damström has managed to accomplish! If the first impression were that the music is Gebrauchsmusik that doesn’t seek any higher ambitions, this impression will fade away at the latest by the time the boy soprano Tinder sings his aria.”